As I begin my 50th year in the Legislature, a look back at my first big deal

Note: On Jan. 10, Sen. Richard J. Codey, who also was New Jersey’s 53d Governor, begins his 50th year in the Legislature. We’ll be sharing memories throughout the year.

Today: What was your first big moment as a legislator?

A few years later, in 1976, Gov. Brendan Byrne and his staff were close to finally pushing through the state’s first income tax after the courts mandated more direct school funding from Trenton. An income tax was really the only play Byrne had, but it was a difficult process, to say the least. The governor and his staff would have to do just about everything imaginable to lock up votes. 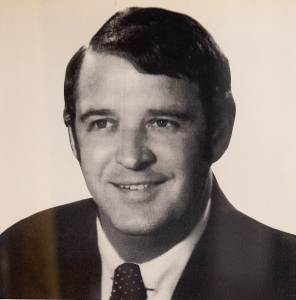 A young — ok, a very young — legislator at work.

Everyone was looking for a deal.

I was still young and hesitant to step out of line, but I had two things going for me: I represented  a reliably safe Democratic district anchored by Orange, my hometown, and I had the street-smarts to know we wouldn’t see opportunities like this come around every day.

So I held out, telling fellow legislators why this was the time to get something for our votes.

My demand was simple: Route 280 had opened three years earlier. The project, if you remember, was riddled with controversy from the beginning. Among other things, it cut through parts of Newark, Orange and East Orange, destroying neighborhoods in its wake.

And here’s the thing: They built the road without an exit for Orange. The people in our city had to use a West Orange exit, which regularly backed up.

I knew what I wanted and I guess I was feeling it at the time. I eventually told the governor’s people they would need to add an exit for Orange on I-280 to win the support of my district for his new income tax. The people in Orange and West Orange both wanted it and needed it, I told them.

Before long, Alan Sagner, then the Department of Transportation commissioner, was landing a helicopter in my old neighborhood, looking for yours truly, who was still living at home.

Sagner even brought plans and blueprints for an Orange exit. We made the deal right there and Interstate 280’s Orange exit soon would be named the Richard J. Codey Exit by order of the Orange City Council.

That was a big deal for the kid Assemblyman, and I walked away with my first taste of how to make a big deal in Trenton. It certainly wouldn’t be my last.